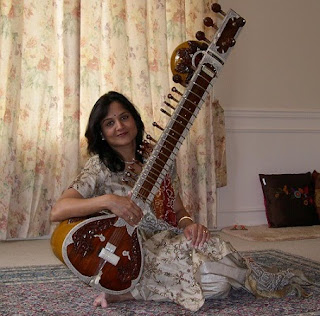 Hi, I am Sampada Bhalerao. I am a musician and music teacher living in Sammamish, WA, USA. I teach Hindustani Classical Music.

My specialties are Sitar and Indian Classical singing. I teach both of these arts to children as well as adults.

Samapda Bhalerao is a musician trained in North Indian Classical music. She was born and brought up in India, and has settled in the Seattle area (East Side) for the past 30 years. She is a Sitar player and a vocalist. She started learning Sitar as well as vocal music with her mother at an early age, followed by various well known musicians in India as well as the US. She is currently learning with Sitar virtuoso Dr. Ravi Gadgil and musicologist Dr. Vikas Kashalkar in India. She has now established herself as a performing artist and a music teacher. She has performed at various venues in the Pacific Northwest region, such as the Northwest Folklife Festival, EMP, Museum of History and Industry, Seattle Art Museum, SAAM, Bellevue City Hall, Bainbridge Art Museum etc. She has performed in support of various causes such as Indo-American Friendship Forum, Path, IACSWA, and various political meet and greets, music workshops, and music shows. She has also performed for Seattle Maharashtra Mandal many times and BMM Chicago (solo), BMM Philadelphia (orchestra).


Sampada has an M. S. degree in Information Systems Management from Seattle Pacific University, USA, and a B. E. in Computer Engineering from Shivaji University, India.

Thank you for visiting my page and please come back.

Pages (My Music and History of Hindustani Music)